Coralesque and other tales to disturb and distract 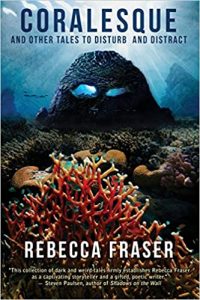 “This collection of dark and weird tales firmly establishes Rebecca Fraser as a captivating storyteller and a gifted, poetic writer." Steven Paulsen, Award-winning author of Shadows on the Wall

A surfer who becomes horrifyingly one with the sea. A new mother’s devastating search for belonging. A stone gargoyle with a violent history. A fisher boy who discovers the real cost of forbidden love. A farmer whose delight at drought-breaking rain quickly turns to terror. A hedonistic rock star who manifests double trouble. A robotic housemaid with a sinister agenda. A dirty ex-cop with a dirtier secret. An unscrupulous mayor’s solution to rid his city of the homeless …
These are just some of the characters you’ll meet in Coralesque and Other Tales to Disturb and Distract, a collection of dark offerings comprising short stories alongside a smattering of flash and poetry.

Introduced by multi-award-winning author, Steven Paulsen, Rebecca Fraser’s collection brings together an eclectic mix of new work, along with previously published, award-nominated, and prize-winning fiction, embracing a diversity of styles from gothic to cyberpunk, to contemporary horror, fantasy, dystopia…and every dark cranny in between.
From the harsh terrain of the Outback, to the depths of the Pacific Ocean, the wilds of Tasmania, dystopian futures, enchanted lands, and the familiarity of suburbia, Coralesque and Other Tales to Disturb and Distract takes readers on a journey into unsettling, unforgiving, and unforgettable territory.

“A good author can write twenty five completely different stories and yet keep their style impact. Rebecca Fraser has done just that in Coralesque. This is my first time reading her work and I am honestly in love. Every story told a dark, twisted tale that left me wanting more.” Chelsea Pittman, Horrorbound.net

“This collection makes me want to pick up more work by Fraser. There are so many stories that are short, yet provide some spine tingling, thought-provoking horror. Highly recommended for anyone wanting to read international horror.”
Lizzy Walker, The Monster Librarian

“… every now and then a short work or collection comes along that blows my mind. I am always admiring of those who are masters of the form and Rebecca Fraser absolutely knows what she’s doing with short form fiction.”
Kathryn Hore, Author of The Wild Card

“Darkness invades the everyday in a stunning set of short stories…As in many of these stories, the fantastic setup resonates with reality. This slim volume packs more power than seems likely. Even the shortest pieces demand attention. Fraser’s insight and eye for detail imbue every story, and her imaginative scope encompasses a prodigious variety of settings and characters. A little book of horrors that’s worth keeping close. ” Clare Rhoden, Aurealis Issue #139

“What Fraser’s writing does brilliantly is pull you right into memories and experiences that are not your own, with scenes so richly detailed that you can almost feel the sand between your toes, the pull of the tide at your heels. Some are everyday worlds and situations, and it’s easy to get so comfortable in them that the sight of blood or death becomes as shocking for you as it is for the characters….So as long as you don’t go into this expecting seashells and slaughter on every page, I’d say you’d have a fine old time taking a dip in these waters.” Ben Walker, Kendall Reviews

“This collection of dark and weird tales firmly establishes Rebecca Fraser as a captivating storyteller and a gifted, poetic writer. Her stories and poems are impelled by powerful narratives, and no matter where they take you—the past, present or future; the street around the corner; foreign countries; or magical lands—her deft world building has you living, breathing and tasting her creations, and her characters populate these fictions with believable authenticity so we are drawn into the stories hardly realising their artifice.”
Steven Paulsen, Award-winning author of Shadows on the Wall 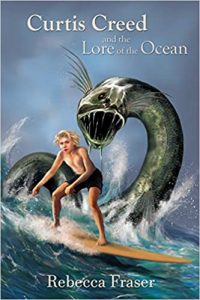 Curtis Creed and the Lore of the Ocean

In the coastal Queensland town of Midnight Cove, thirteen year old Curtis Creed’s world is falling apart.  Once a talented upcoming surfer, he cannot bring himself to return to the ocean.  His inability to overcome his fear earns him the ridicule of his older brother, Dylan. Worse, his family is struggling to cope with the loss of their father in a rock fishing accident.

The summer holiday looks long and lonely for Curtis until he meets Navaya, a mysterious sea dweller he rescues from fishing line in a rock pool.

An ancient pearl harvester from the underwater kingdom of Araxie, Navaya must protect the Moami, key to an underwater cavern hiding the last of the Arax pearls.

But the Moami is lost, and it looks like Glynts – dangerous, viper-like creatures from deep sea – might succeed in their mission to steal the pearls, giving them the ability to breathe on land.

When Curtis agrees to help Navaya find the Moami he embarks on a dangerous adventure that will see him join forces with awkward but brilliant new girl in town, Morgan.

Will Curtis be able to overcome his fears to return the Moami to its rightful owners before the Glynts succeed in their deadly plan? Was his father’s death really an accident? And what exactly is the lore of the ocean?

Curtis Creed and the Lore of the Ocean is a fast-paced middle grade fantasy adventure for the young and young at heart that highlights themes and issues relevant to today’s youth:   friendship and family dynamics, mental health, respect for the environment, identity, the shape of grief, and courage in the face of adversity.

Curtis Creed and the Lore of the Ocean is available through all good bookstores, or in paperback and eBook via Amazon or your favourite digital bookseller.